Wood Surfboards:  A Short History of their Evolution

Captain Cook was the first European traveler to document the use of surfboards by the Hawaiian culture and it is quite probable that the use of wood boards for surfing was part of other Polynesian cultures. There have been many styles of wood boards documented over the years and fortunately many examples of early wood boards still exist today. Examples of early Hawaiian boards can be seen today at the Bishop Museum in Honolulu.

Papa he’e nalu is the Hawaiian word for surfboard. Wave riding goes back many hundreds of years in Hawaii and was practiced by Hawaiian royalty. The boards ridden in the pre-Christian era were hewn from native Hawaiian woods and ranged in size from the short “paipo” style boards to the huge “olo” style. As the Christian era took hold in Hawaiian culture, riding surfboards fell into disfavor and was nearly lost as a traditional activity. During the early 20th century surfing began to make a resurgence in Hawaii and surfboard riding started to make a comeback into Hawaiian culture. With the arrival of tourists to Hawaii, many North Americans became aware of the activity for the first time and the beginnings of our “modern” surf culture were born. Promoted both in Hawaii and California by Olympic champion Duke Kahanamoku in the 1920’s and 30’s, surf culture has spread worldwide and is now found in virtually all climates.

The current interest in building hollow wood surfboards has been fostered by the availability of modern technology and an interest in sustainability made products. Materials such as bio resins, fiberglass and plantation grown woods have made it possible to build durable, beautiful surf and paddleboards at home in your garage with a minimal impact on the planet. The first hollow wood surf and paddleboards were created in the 1930’s and 40’s by Tom Blake and were a major step forward in surf and paddleboard building technology. Tom Blake’s creativity and the “new” materials of that era represented by plywood and waterproof adhesives made it possible for Blake to create much lighter boards than what had been built from solid timber. Further improvements in adhesives and fiberglass technology have allowed us to create hollow wood boards that will outlast modern foam and glass boards and look great for years. We want to carry on this tradition. 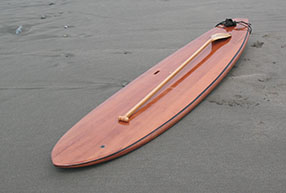