Why build with paulownia wood?

Written by clearwood on July 8, 2015. Posted in Building Process

Why build with paulownia wood? Ok, I will admit upfront that I sell paulownia wood.  That being said, the reason I do is that I want to make it available to my customers and also individuals that design and build their own hollow wood SUP’s, surfboards and kayaks.  This wood is mostly unknown to the woodworking “community” outside the hollow wood SUP and surfboard markets but it is a quite remarkable species of tree and makes very strong and light hollow wood boards.  The paulownia tree is a native of Southeast Asia and is the highest weight to strength ratio hardwood on Earth.  It’s also fast growing and is plantation grown in many parts of the world. 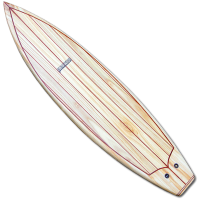 Written by clearwood on December 1, 2014. Posted in Building Process

I was telling the story of the redwood pin lines material in the boards I build and my brother-in-law said, “Bro, you need to tell that story!”  So, here goes.  It’s really a story about the part of Oregon I live in and the railroad tunnels that connect Southern Oregon to Northern California.  The original railroad line north in California and the railroad south in Oregon meet at the top of the Siskiyou Mountains near where Interstate 5 crosses over the mountains.  The line was completed in the mid 1880’s and “Tunnel 13” is the one at the top of the pass.  As the story goes, the shoring timbers for the tunnels were enormous 80′ long clear, vertical grain redwood timbers that were cut in Humboldt County in Northern California in the the early 1880’s.  From that point the timbers were put on a steamship and shipped to Portland, Oregon and were then loaded on flatcars and sent south to the top of the Siskiyou grade where they were used to shore up the various tunnels, including “Tunnel 13”.  So now the story gets really interesting.  For approximately 40 years following the completion of the rail line, everything went fine at “Tunnel 13”.  Then, in 1923, the three DeAutremont brother attempted to rob the train by stopping it at the mouth of “Tunnel 13” where they proceeded to blow up the mail car killing the mail clerk.  The brothers also shot and killed both the conductor and engineer.  The subsequent manhunt lasted four years and eventually all were caught and imprisoned. The attempted robbery was the last train “robbery” in North America.

In the late 1990’s the railroad abandoned the rail line over the Siskiyou Mountains since the tunnels were designed for older and narrower trains.  When the trains stopped going through the tunnel the tunnel became a nice dry place for homeless people to live in and the homeless, with their campfires, caught the shoring timbers on fire.  A few years later the railroad decided to rebuild the tunnel to wider specs for modern trains and all of the partially burned timbers were salvaged.  At the time I was building cabinets for a new house project and the owner of the project knew the salvage contractor for the tunnel shoring timbers and we ended up building an outdoor kitchen out of “Tunnel 13” redwood.  When the house with the outdoor kitchen made from “Tunnel 13” redwood was sold I was asked if I wanted all of the leftovers and well, that’s how my prototype hollow paddle and surfboards ended up having “Tunnel 13” redwood pin lines in them.

Written by clearwood on October 31, 2014. Posted in Building Process

Using Rocker Tabs for Building in the Rocker Profile

If you have ever built a hollow wood standup paddleboard (SUP) or hollow wood surfboard you have probably built it using some variation of a rocker table.  When I started building hollow wood boards I did as well.  I built my first boards that way because that’s the way everyone else was building.  But there is a simpler way of building these hollow wood boards without building this single purpose adjustable table.  The CLEARWOOD team has developed a rocker tab system that allows the frame to be assembled on a flat work surface instead of the adjustable rocker table.  The rocker tabs are designed into the bottom to the frames and are referenced off of a flat baseline which is part of the layout created when designing the board.  The tabs are cut off and sanded flush when the board is flipped over during the building process.

If you are a builder that does your own design work you can easily design these tabs into your framework during the design process.  The addition of the rocker tabs will consume a bit more plywood but not substantially more and the simplified setup for establishing a true rocker profile makes it well worth the additional effort. I cut my frame kits out with a cnc router but I am also starting to see builders that hand cut their parts starting to experiment with the rocker tab solution to creating a consistent rocker profile.

I’ve been paddling my set of  Black Project standup paddleboard fins on my 12′ 6″ and 14′ flatwater hollow wood paddleboards for a couple of months now and have a pretty solid feel for the performance value this set of fins contributes to my paddling.  These are highly refined fins that address all the components necessary to provide uncompromising performance for those wanting to get the most out of their paddling whether racing or touring.  The super refined foil on these fins is based on the extensive experience of Black Project founder, Chris Freeman and his team riders who has been involved with windsurfing and paddleboarding for many years and have developed Black Project fins based on the need for speed and performance.  In my opinion, these fins leave nothing “on the table” when it comes to maximal performance.  The primary reason I have been attracted to Black Project fins has been to really get the most out of my hollow wood standup paddleboards and also, since I’m usually one of the more senior paddlers on the course I need all the help I can muster!  What I have found over the course of dozens of sessions is that the ease with which I can maintain my target strokes per side has improved and my strokes per mile have gone down by a few percentage points on average.   I find these fins to just feel smoother through the water with less visible tail turbulence than any fin I have previously used.  For crosswind/side chop conditions the R8 Series in the 28 size has provided a combination of speed, stability and control that is really easy to feel and provides major confidence in rough conditions.   All in all, these are great fins for touring or racing if you are looking for a seriously uncompromising fin. Flatwater and downwind fins for sups

Written by clearwood on February 18, 2014. Posted in Building Process

Text of Article for http://www.supboardermag.com/2014/02/11/clearwood-make-you-own-wooden-paddleboard/

Wood paddleboards and surfboards have a long history and they have been common in Hawaii for many centuries. The modern version of “woodies” however, is something altogether different than what ancient Hawaiians were riding. With the advent of waterproof glues and plywood which became available in the 1930’s, Tom Blake who lived in Southern California began constructing the “modern” “kookbox” type of paddleboard. These were common for several decades and used by the surf lifeguards on the beaches of Southern California.

Currently, highly refined versions of the “kookbox” can be built from scratch, plans or kits and come in many forms from surf style and flat water sup’s to straight prone paddle surfboards and builders around the world have taken up the challenge of building one or several of these craft for their personal quivers. There are forums online dedicated to this type of board construction with builders from many different countries contributing to an ongoing dialogue about all of the nuances of the building process. Some woods that can be sourced for hollow board construction will yield a finished board as light as or lighter than boards of equivalent size made of foam and fiberglass, with the added benefit that hollow wood boards can and do outlast many “boards” made of foam and plastic.

I will be honest here; building your own hollow wooden SUP is NOT a quick and easy way to get on the water. You may ask why, then, would anyone want to build a hollow wood board? The answer to that question can be stated in this way: the rewards are measured in the beauty, longevity and personal satisfaction that will come with building a wood SUP with your own hands. World-wide, there is great interest in alternative building methods for “home-made” surfboards and paddleboards. What that means to a prospective hollow wood board builder is there are many different styles of hollow wooden SUPs to choose from based on your interest in the various aspects of the sport. Additionally, hollow wood boards can be built with mostly sustainable products such as salvaged or plantation grown woods and there are now epoxy resins available which are made from non-petroleum based raw materials.

The process of building a board of this type is more about a personal journey and creative expression than it is about popping out a board that looks like everything else on the water. In the end, most builders don’t take on projects of this sort because it is easy. Building a hollow wood SUP can be learned by most people who truly want to learn the process but it is not a project for everyone. Certainly, previous woodworking experience helps. What I say to prospective hollow wood board builders is that if a board is “in you”, you will find a way to get it built. Most suppliers of kit components provide ongoing support during the building process, and as previously mentioned there are some great online resources for asking questions and gleaning insights into how the workflow should go. In the end, patience and commitment are the two main ingredients needed for you to finish a board and get it into the water.

A question many prospective hollow wood board builders ask is, “how long will it take?” There isn’t one answer to this question. It depends on the tools you have available, your eagerness to work on a woodworking project and the level of finished product you want to achieve. What can be said about building a hollow wood SUP is that it very well could be one of the most difficult but rewarding things you do in your life!